Sixty year member and former Chief James Neal Schoonover Jr., affectionately known as “Big Jim”, has maintained a detailed journal of the North Queensbury Fire Company from our inception in 1948. The following Our History in Brief is an abridged version written by Jim.

Several more historical photos can be viewed here and a comprehensive version of Jim Schoonover’s journal, as edited by Former Chief Waite Cowles, will soon be available as Big Jim’s Journal.

OUR HISTORY IN BRIEF by Jim Schnoover

The first meeting to organize the North Queensbury Volunteer Fire Company was held in the old District #5 schoolhouse on upper Ridge Road on September 24, 1948. The meeting was attended by the following 18 men.

The Fire District was decided upon & a set of by-laws was drawn up. Over the following thirty days 21 more members signed on and a 5,000 square foot landsite was donated by Robert LaPan, At the October 24th meeting the first slate of officers was elected

A building committee was appointed & plans to acquire a 1916 American LaFrance fire engine owned by Granville  A. Beals of Assembly Point and keep it in Al Van Horne’s garage until a firehouse was built. 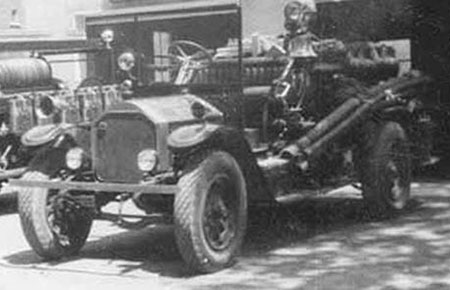 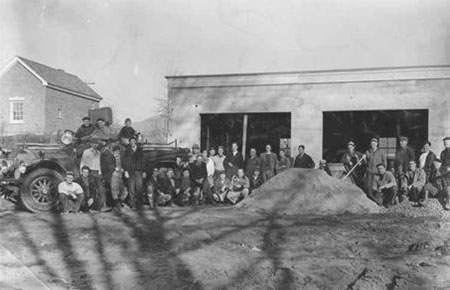 The first alarm was answered Sunday, October 24th to a brush fire on Assembly Point. That same night a second call was answered.  Drills were held regularly in conformance with state law. 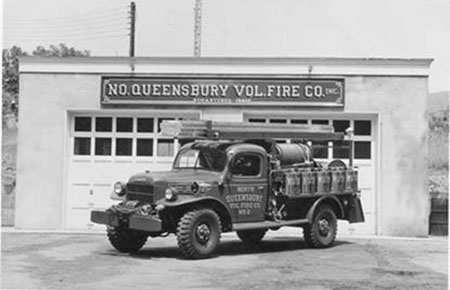 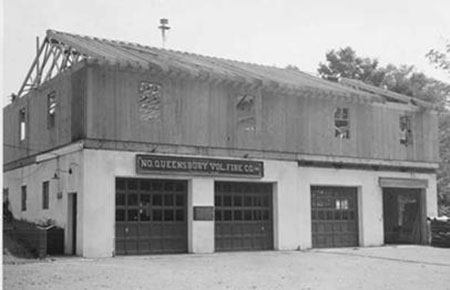 In 1955 the firehouse was widened to twice its original width and a second story added in 1962.  An annual smorgasbord dinner was held at the firehouse to finance purchase of equipment and the second story was utilized to advantage to accommodate these dinners. The entire membership would work for a week in preparation and we would make ALMOST $1,000.00 for the effort.

In 1955 during a fire then Chief Douglas Webster and his brother Gordon were both stung by bees. Both men were allergic and had to be hospitalized.  In 1958 Chief Webster was again stung while repairing a water line at Hayward cottages  and this time died from the reaction.

In 1949 equipment was acquired and a rescue squad was formed as a part of the Company. The first ambulance was acquired in 1959 and replaced in 1961. Needless to say these vehicles were far from new but served our purposes well. Ralph Hill Sr. Was the first Rescue Squad Captain and served many years as a dedicated first-aider. Today the Rescue Squad is a separate but associated organization and the training and abilities make the members proficient at their skills and many lives have been saved by their efforts. Many of the members participate in both firefighting and rescue squad work. The Fire Company often assists the Rescue Squad in emergency situations such as motor vehicle accidents and water, ice or mountain rescues.

Over the years many more members served the Company as firefighters and rescue squad members putting many hours into training and responding to emergency calls. Often calls come during the night, during storms or other inopportune times but the volunteers are always ready to drop whatever they’re doing to do their duty. 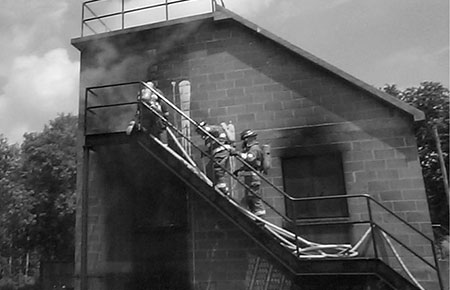 In the late 1980s many changes were taking place in the firefighting industry. Organizations such as OSHA began tightening regulations and making new rulings that seriously affected the way things were done. Mandatory equipment, schooling, training and methods were being revised & becoming more complicated. Paper work, reports and record keeping became a major operation. Computers were coming into usage and were becoming necessity rather than a convenience. Rules were set up on what a firefighter must wear when fighting fires & emergencies.

In the early 1990s it became obvious that our present firehouse was not only inadequate but did not meet OSHA and other mandates. We negotiated for a piece of adjoining property and finally made acquisition. After coming to a standstill on design for a new building the Company finally selected Richard Jones & Associates as the architect to design the new firehouse. Peter Carr, Peter Frederick & Jim Schoonover with secretary Vern Burkhart taking notes started meeting with the architect early in 1993, meeting almost weekly until in August 1993 plans were finalized. Construction started shortly and work progressed during the winter with completion early in 1994. For the next several months finishing touches & some revisions were performed to bring the building up to its present state of usefulness. 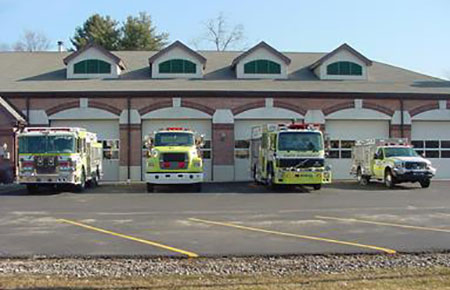 Since that time new trucks have been added, a rubber boat for water rescue, a 6 wheel drive for mountain rescue and a hovercraft for ice rescues have been housed in the new firehouse. The members have gone through courses in various types of rescue operations & are proficient in procedures involved. Rope rescue equipment, Jaws of Life and other specialized equipment are in regular use and have been credited with saving lives. There have been times when our volunteers have put their own lives at risk in order to save someone in peril. Our Fire Company cooperates with other Companies in the district through a Mutual Aid Plan. These Companies cooperated during the ice storm emergency in the northern part of the state several winters ago. Trucks, generators and volunteers spent time there working with their own services to help the area resume normality.